Must Read! "The original version of Teri Galiyan was much better than the new one” netizens react to Galliyan Returns song from Ek Villain Returns

Recently the song Galliyan Returns from the movie Ek Villain Returns was released and it is getting some mixed reactions from the fans all over, check out the comments coming from the side of netizens

MUMBAI : The upcoming movie Ek Villain Returns has been the talk of the town ever since it was in the making, the fans were looking forward to the movie because of the hype and the impact which was created by the prequel which had Shraddha Kapoor, Sidharth Malhotra, and Riteish Deshmukh in never-seen-before avatars.

How can we forget the song Teri Galiyan from the prequel Ek Villain, glimpses of which we have seen in the trailer of Ek Villain Returns? And now finally the song Galliyan Returns has been released and it is getting some mixed reactions from the fans. 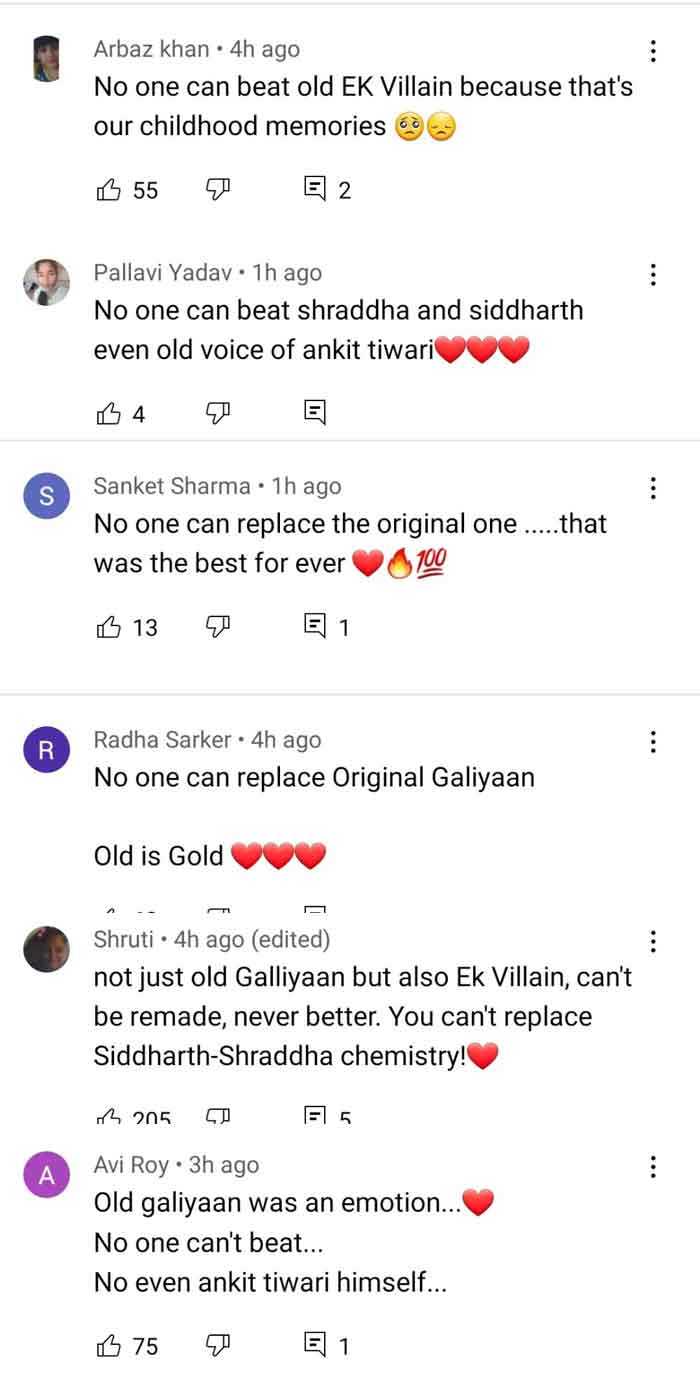 As we can see, netizens are saying not only the song but the movie should not have been remade, many people are saying that the movie Ek Villain and the song Teri Galiyan hold a very special place in their hearts. They are also saying that the original version of Teri Galiyan is much better than this reprise version. On the other hand, they are also remembering the chemistry between Shraddha Kapoor and Sidharth Malhotra which has a special place for them.

What are your views on these comments coming from the side of the netizens for the song Galliyan Returns and which version did you like, do let us know in the comments section below.

Talking about the movie Ek Villain Returns, it has John Abraham, Arjun Kapoor, Disha Patani, and Tara Sutaria, and it is all set to hit the screen on 29th July.

For more news from the world of Bollywood, digital, and television, stay tuned to TellyChakkar.

Top Stories
Na Umra Ki Seema Ho- Oh No! Dev needs to preserve the 'Raichand' name; Vidhi to break Dev’s trust?
MUMBAI : Star Bharat has launched a new show, ‘Na Umra Ki Seema Ho’. The story is very promising as its poles apart...
OMG! Check out this BTS video of Tanvi Dogra shooting for the accident scene
MUMBAI : Colors' new show Parineetii is doing well; the audience loves the show and they are connected to the stars of...
EXCLUSIVE! 'Just because you stand with someone or click pictures doesn't mean you are in a relationship', Shehnaaz Gill gives a befitting reply to the media for asking about her relationship
MUMBAI:  Tellychakkar is back with yet another exclusive update for their avid readers. Shehnaaz Gill is one of the...
EXCLUSIVE! 'I love characters that are extremely challenging and performance orientated' Kavya aka Madalsa Sharma Chakraborty reveals the roles that would interest her the most
MUMBAI:Two years and Anupamaa hasn't left the top shelf of the TRP ratings, the performances are indeed breathtaking...
Yeh Rishta Kya Kehlata Hai- Woah! Akshara finds a new lead, wants to prove Kairav innocent
MUMBAI: Yeh Rishta Kya Kehlata Hai is one of the longest-running shows on television, and it keeps continuing to...
EXCLUSIVE! 'Kiara brings positivity and energy on the sets' Riya Soni gets CANDID about her Bohot Pyaar Karte Hai co-stars, working with Zoon aka Kiara and more
MUMBAI:  Sandiip Sikcand brings a new show for Star Bharat titled Bohot Pyaar Karte Hai, the concept and storyline are...
Recent Stories